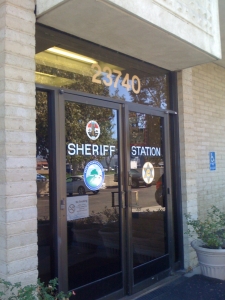 If you know someone, a friend or loved one, that has been arrested and taken into custody in Santa Clarita or any of the surrounding areas, you will likely have a lot of questions and we can help. This page will provide you with a wealth of information regarding the:

As well as additional tools to help you locate your friend or loved one within the jail system.

Our local Santa Clarita agency is also our headquarters, located directly across the street from the Santa Clarita Sheriff’s Station Jail, just a quick walk from the station doors!

We offer our clients and families a comfortable and private place to handle the paperwork and always have available, hot coffee, tea, water, snacks and refreshments, while they wait for their loved ones release. This, versus waiting long, arduous hours in a sheriff’s station lobby.

Booking and Processing in Santa Clarita

Those who are arrested in any of the above areas will likely be taken to the Santa Clarita Sheriff Station where they will go through the booking and processing procedure. This process is one that you’re likely familiar with, as it is often depicted on television and in movies. It includes taking an inmate’s photograph, recording their fingerprints and conducting a national background check. Only after these things have been completed will an inmate be cleared for bail and eligible for release.

Visiting hours at the SCV Sheriff Station are from 10 a.m. to 2 p.m. daily. Visitation is limited to 1 adult and 2 children per day.

The on-site jail at the Santa Clarita Sheriff Station is comprised of 11 cells and has room for about 40 inmates. It is not designed for the long-term housing of inmates, and, as a result, if someone is not bailed out after 72 hours, or if the jail becomes overcrowded, he or she is likely to be transferred to one of the larger facilities downtown. Men are taken to Twin Towers Correctional Facility while women are transferred to the Lynwood Jail.

Twin Towers jail is a facility for male inmates, and is a much, much larger and busier jail than the one located at the SCV Sheriff Station, and as such, the jail allows for the scheduling of visitations up to 7-days in advance.

For more information in regards to visitations at the Lynwood Jail, take a look at their visiting info.

When an inmate is transferred to one of the larger county facilities, he or she must be processed into the system at their new location. During this period, the inmate cannot be bailed out, even if a bail bond has been obtained. It is only after the inmate has been “processed in” to the larger facility, that he or she can then be “processed out.” As a result, inmates who are transferred are likely to spend an additional 24 hours or longer in custody as they go through the system.

If the bail bond process is begun quickly, though, while the inmate is still located at the Santa Clarita Sheriff Station jail, then it is possible to avoid the transfer process altogether and bail him or her out very quickly from Santa Clarita.

If you are unsure as to where your friend or loved one is located, the LASD Inmate Locator can be a useful tool.