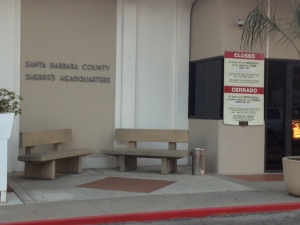 Do you know someone that’s been arrested and taken into custody by the local Police or Sheriff’s Department in Santa Barbara? If so, you’ve probably got a lot of questions. Luckily, a local licensed, professional bail bondsman is available 24/7 to take your call.

If you’re searching for bail bonds in Santa Barbara, we have years of experience in the bail bond industry and can quickly and accurately answer any questions you may have. Whether you just need some answers to your questions, or you want to get the bail bond application process started immediately, we’re always available to help. Our local Santa Barbara agents can be reached 24-hours a day, 7-days a week.

When someone is arrested in Santa Barbara, their first stop may be the Santa Barbara Police or Sheriff’s Station where they will go through booking and processing. The procedure can take anywhere from 45-minutes to several hours, depending on how busy the station is at the time of arrest.

This main County jail holds pre-trial detainees as well as male and female sentenced inmates. It receives new bookings directly from the Sheriff’s Patrol and additional south coast police agencies such as: The Santa Barbara Police Department, The University Of California Police Department, and the California Highway Patrol. Again, the length of time an inmate spends at a local Santa Barbara Station Jail will depend on how busy they are. If the on-site jail gets overcrowded, they will transfer inmates to the Main County Jail sooner.

When inmates are transferred to the larger main Santa Barbara County jail, they will have to go through processing once again at the new facility. Depending on how busy it is, it may add several hours (or even another day) to their time in custody as an inmate cannot be bailed out while they are waiting to be processed in. That being the case, beginning the bail bond process quickly can often avoid the transfer process altogether and get your friend or loved one out of jail much sooner.

Why Bail Someone Out?

No matter what a person’s day-to-day life includes, getting locked up in jail will make it impossible for them to continue with whatever it is they need to do. When someone is in jail, they won’t be able to go to work, attend classes, or even tend to family obligations like taking care of their children. Spending an extended period of time in custody can, in some cases, result in lost jobs, failed classes and a host of family-related issues. Bailing someone out allows them to continue with their life and make adequate preparations if they expect to spend time in jail, or to secure a defense lawyer to help ensure that they don’t.

Bailing someone out of the Santa Barbara County jail doesn’t take very long, and the sooner the process begins, the more likely the defendant will be out of police custody before they are transferred. It starts by giving us a call and providing some general information including the inmate’s name, birth date and the date and time of arrest. Having this information available ahead of time can help expedite the process, but if not all of it is available we can still help you out.

Once we have the information, we will use it to locate the inmate within the system and verify their eligibility for bail. Once that’s been done, we will have you fill out the short, simple bail bond application forms and sign the indemnitor’s agreement. After that, we dispatch an agent to the jail and your friend or loved one will be released a short time later.

If you aren’t able to meet with us in person, the entire bail bond process can be handled via phone, fax or email. Situations like this can be stressful enough, and it’s our goal to make the process as stress-free for you as possible.

Paying for a Bail Bond in Santa Barbara

We accept a variety of payment options, which include major debit/credit cards (Visa, Master Card, American Express and Discover) as well as cash, check (both business and personal checks are accepted), money order, bank account transfer and money wire.

If you would like to finance your bail bond, we have a variety of flexible payment plans that are designed to fit most any budget. Whether you choose to pay the cost of a bail bond outright, or finance it, we never include any additional fees, charges or interest.

If you would like additional information regarding bail bonds in Santa Barbara, please feel free to give us a call any time. A licensed, professional bail bondsman is available to take your call right now at 805-874-2245 or toll free 877-422-4591.