Southern California is hot, dry, and prone to fires. When you add into the mix the use of illegal fireworks, it could end up being a recipe for disaster.

As such, Santa Clarita Sheriff Station deputies have been raising awareness about the fact that fireworks are illegal in the SCV and to let residents know about the possible penalties if caught using them.

Areas surrounding the SCV, such as Fillmore and Palmdale allow the sale and use of “safe and sane” fireworks within city limits.

It can be very tempting for Santa Clarita residents to travel to either one of these places and bring some of those fireworks back into the city to use on the Fourth. However, fireworks of any kind are illegal in Santa Clarita, even sparklers, due to the very real possibility that a fire could start and quickly get out of hand.

While officials do their best to alert the public to the dangers of using fireworks in Santa Clarita, it’s inevitable that some individuals will still choose to do so. When deputies encounter these individuals, they’re usually ticketed – and those tickets can be costly.

Not only that, but lighting off certain fireworks that can be launched into the air constitutes a felony violation that include penalties which can result in up to a year in county jail.

According to deputy Josh Dubin, the SCV Sheriff Station will be “fully staffed” July 4th, due to the high volume of calls that they receive.

Instead, consider some of the high energy Independence Day fireworks shows, parade and events in and around the City. To see a full color flyer which details all of the goings on, click here.

From all of us at SCV Bail Bonds, we wish you a happy and safe 4th of July! 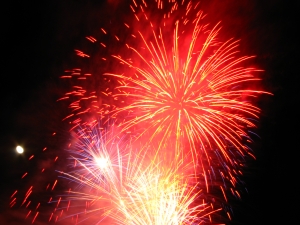