When you need fast approval of a bail bond in Santa Clarita, a professional, licensed bondsman is right here in town to help you. We are the premiere Santa Clarita Valley bail bonds agency with an office located just a quick walk across the street from the Santa Clarita Sheriff Station doors:

For immediate information regarding, booking, charge, arrest or bail bonds in Santa Clarita for a friend, family member or loved one, contact us anytime of the day or night at:

You’ll always speak to an owner/agent who will patiently and expertly explain the bail process and personally work with you step-by-step, to have the defendant quickly released from the Santa Clarita Station Jail. We understand the stress and the worry when someone you love has been arrested. 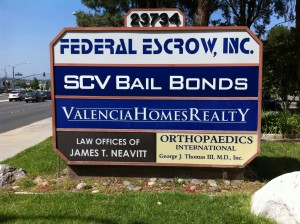 Our SCV Bail Bonds sign stands as a brightly lit beacon of help and assistance to the SCV community and beyond.

Our office is open to serve you 24 hours a day and located right on the corner of Magic Mountain and Valencia Boulevards:

The Santa Clarita station has 11 jail cells and can temporarily housing up to 40 inmates. There are other jails located in the Santa Clarita Valley area such as Pitchess Detention Center, and North County Correction Facility (NCCF), however, new arrestees in Santa Clarita may not be transported directly to these facilities.

The Booking and Release Process at Santa Clarita Jail

When a defendant is arrested at the Santa Clarita Station Jail, their booking process is generally as follows: They will be fingerprinted and photographs will be taken of them, (also called mugshots). Their information will also be entered into a nationwide database or “Live Scan” to make sure there are not any parole holds, warrants or immigration holds, etc.

The booking process can take anywhere from 2 to 4 hours or longer, depending upon the individuals background and circumstances. Once their information comes back clear, they will be ready for bail.  If the defendant is not bailed out quickly, they will remain in custody until their upcoming court arrangement. Unfortunatelly, if they are arrested on a Friday, they will have to wait until Monday for their court appearance.

If this happens, it can take much longer, up to 24 hours to bail them out of the larger Los Angeles County facilities. This is why we always suggest bailing them out while they are still at the local Santa Clarita station jail for a much faster release time.

All defendants being held in custody at the Santa Clarita Jail are allowed a phone call to a bail bondsman, clergy or an attorney.

We can personally work with you and your family to handle the easy bail application and contract. You can meet with us in the comfort and privacy of our conveniently located office directly across from the station 24 hours a day. We can also meet with you at your home, office or at the Santa Clarita Station jail.

Alternately, you can also receive the bail paperwork by email or fax from anywhere nationwide. The approval for the bond typically takes about 10 minutes and consists of a few questions relating to the defendant, such as their employment status, family, homeownership, credit status and citizenship.

We always work carefully to make sure our clients understand all of their their responsibilities before filling out any bail bond paperwork.

Once  the paperwork and payment are complete, the bond will be posted at the jail. The release time at the Santa Clarita station can take from 30 minutes to 1 hour. We can always answer any questions you have about the bail application process.

To make it easier, we offer flexible payment plans and take most major credit cards, cash, checks, direct deposit and wire transfer. Very often, we can write what’s called a “signature bond,” without the requirement of collateral. Call and speak with a licensed agent to go over all of your payment qualifications and bail bond options.

When a defendant has been released on bail, it is very important the defendant and “the indemnitor” abide by all the instructions and court dates set forth. The indemnitor is the person who signs the bail contract, pays the bail bond fee and takes full responsibility to make sure the defendant gets to all court dates. Together, the Indemnitor and the bail agency will jointly promise to the the court that the defendant will not miss any of their necessary court appearances.

if the defendant does fail to appear in front of the judge on their court date, a warrant for their arrest may be issued which is also called a “forfeiture.” In our experience, we have found that a missed court appearance is usually a simple mistake which can be easily handled when our bail company is contacted right away.

Most Felony cases out of Santa Clarita will be heard in the San Fernando Court. Misdemeanor cases are heard out of the Santa Clarita, Newhall Court.

Visiting an Inmate at the Santa Clarita Jail

When planning to visit an arrestee at the Santa Clarita Station Jail, it is best to follow all rules:

These days, it’s hard to know who to you trust in the bail bond business. We’re caring, professional, licensed California bail bondsmen with experience and knowledge of California’s jail system.

Read our testimonials and see why we have satisfied clients from the Santa Clarita Valley to the entire state of California and beyond!

Be an SCV Bail Bonds fan on our Facebook Page!

Call SCV Bail Bonds locally at (661) 299-BAIL (2245) or toll-free, nationwide at 877-422-4591 for professional, experienced bail service that you can trust. And see why choosing the right Santa Clarita Valley Bail Bond agency can make all the difference to you and your family!