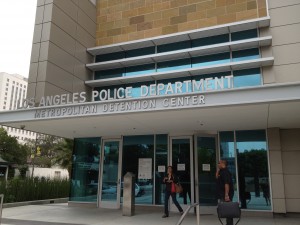 There is a new jail facility located in downtown Los Angeles, called the Metropolitan Detention Center Jail — also known as “MDC.” 877-422-4591. This state-of-the-art facility has been up and running since February of 2011.

Those who have been arrested in the areas of Chinatown, Little Tokyo, South Park, Central City East, Historic Core, Financial District, Artists Lofts, Olvera Street, Solano Canyon, South Park-Entertainment, the Toy District, The Jewelry District, The Convention Center, The Fashion District, and the Bunker Hill area will be taken the the new Metro Center Jail.

Previously, people who were arrested by the Central Bureau of the Los Angeles Police Department were taken to Parker Center, also known as “The Glass House,” or the West Hollywood Police Station. This is generally no longer the case.

The new Metro Center Jail detention center in Los Angeles is large – about 180,000 square feet as is administrated by the Central Bureau of the Los Angeles Police Department. It is a Type I detention facility which can only hold arrestees for a maximum of 96 hours. The new Metro Detention Center is right next door to the Police Administration Building. 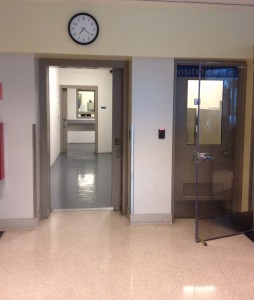 If you intend to visit someone who is custody in the MDC it is best to be informed. Inmates are only allowed one daily visit from a friend or family member during regular hours. However, their attorney, bail bondsman, or member of the clergy may visit anytime.

The Bail Process at MDC

Bail can be posted here 24 hours a day, however, the wait time for someone to be released from the MDC can be long. At SCV Bail Bonds, we can begin working on the bond immediately, so the one you care for won’t have to spend any more time than necessary in custody.

We’re a company that cares about you and your loved ones and will take the time to discuss all of your options before moving forward with the bond.

Once you are ready, We’ll send you our easy-read application, then, we will walk you through the entire bail bond process step by step. You can opt to receive our contract by email and fax or we can deliver it to you personally at your home, office or directly at the jail. Many of our clients never leave their home or office to complete their bond paperwork!

Paying for a Bail Bond at Metro

To pay for the bond, we accept all major credit cards, cash and your personal / business checks. Just contact a licensed bondsman with SCV Bail Bonds to find out more. We also have a very comprehensive website where you can read more about the bail process and bail bond FAQ’s.

If you have questions about someone in custody at MDC, please don’t hesitate to call a licensed SCV Bail Bondsman.