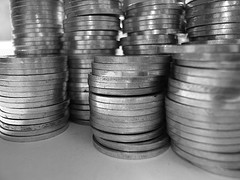 In a nut-shell, money laundering is the process in which someone takes money earned from illegal means and channels it through a legitimate business in order to obscure its source.

The State of California, though, has a very broad definition on the books as far as money laundering is concerned. As a matter of fact, it’s possible to be charged with money laundering just by depositing funds into any financial institution, regardless of whether or not a person intended to obscure the source of that money.

If someone you know has been arrested and taken into custody on money laundering charges, and they have been offered bail, we can help you get them out of jail fast. A fully licensed bail bondsman is available any time of day or night to take your call at 877-422-4591.

California Penal Code 186.10 PC makes it illegal for an individual to conduct any sort of transaction through a financial institution (bank, credit union, etc.) using finances that were gained from illegal means. As stated above, money laundering typically involves attempting to distort or obscure the illegal source of an amount of money. In California, though, you can be charged with money laundering just by making a bank deposit using funds gained illegally, regardless of whether or not you intended to hide their source.

Another facet of money laundering charges is that the person in question must know that the money they are depositing came from illegal means. Suppose the man from the example above gave $5,000 to his mother to deposit in the bank for him. His mother had no idea how he got the money, but, being a good mom, was happy to do her son the favor of making a bank deposit for him. She cannot be charged with violating California Penal Code 186010 PC because she did not know the money she was given was earned from selling stolen credit cards.

Violations of Health and Safety Code 11370.9 HS come into play specifically when money is being used from the sale of drugs. In order to be convicted of violating Health and Safety Code 11370.9 HS, the money must come from either the sale or transport of illegal substances. Importantly, the money does not need to pass through a bank in order for someone to  be charged with violating 11370.9 HS. For example, let’s say that a couple wants to avoid possible money laundering charges by concealing the illegal source of their income in a different way. That couple sells marijuana together, and uses that money to purchase a brand new leather couch for their living room.  They can be charged with violating California Health and Safety Code 11370.9 HS because the money they used came from the sale or transport of illegal drugs, and because they bought the couch to hide the source of the income.

It’s important to note the distinction between California Penal Code 186.10 PC and California Health and Safety Code 11370.9 HS. 186.10 PC involves money gained through illegal means being involved in a transaction through a bank, whereas 11370.9 HS just involves spending money on anything that was gained from the sale or transport of illegal drugs with the intent of concealing the source of that income.

California Penal Code 186.10 PC can be charged as either a misdemeanor or a felony, depending on the circumstances of the crime. Misdemeanor convictions carry a possible penalty of up to 1-year in county jail and up to $1,000 in fines. Felonies, though, take a pretty sizable step up. They include anywhere from 16-months to 3-years in prison and a fine of up to $250,000 or twice the amount of money laundered, whichever is greater.

For someone who has been convicted of money laundering in the past, a second felony conviction can have an increased penalty of a fine of up to $500,000 or 5 times the entire amount of money laundered, whichever is greater.

The amount of time an individual who is convicted will serve in prison is increased by 1 year if the amount of money laundered is more than $50,000. If the amount is over $2,500,000, then the prison sentence can include an extra 4 years.

Health and Safety Code 11370.9 HS can also be charged as either a misdemeanor or a felony. Possible sentences for misdemeanor convictions include up to 1 year in county jail and/or a fine of up to $1,000. Felony convictions include possible penalties of 2-4 years in state prison and/or a fine of up to $250,000 or twice the amount of money laundered, whichever is greater.

If you would like additional information on Money Laundering charges, or you would like to get the bail bond application process started right away, please feel free to call and speak directly with a bail bondsman at 877-422-4691. Our offices are open 24 hours a day, 7 days a week.

If a friend or loved one has been arrested and charged with money laundering, the first thing to do is give us a call and provide a little bit of information to the bail bondsman. We will use this information to locate him or her within the system and verify their eligibility for bail. Then, you will need to fill out the short, simple bail bond application forms and indemnitor’s agreement. After that, we will dispatch one of our agents to the jail and your friend or loved one will be released shortly thereafter.

If you’re from out of the area or are otherwise unable to meet with us in person, the entire process can be completed from start to finish via fax or email.

The Cost of a Bail Bond

We will beat any locally advertised price!

We accept a variety of payment options which include major credit/debit cards (American Express, Visa, Master Card and Discover) as well as cash, business or personal checks, money orders, bank account transfers and money wire. If you wish to finance your bail bond, we provide several flexible payment plans that are designed to fit most any budget and all of them include 0% interest.