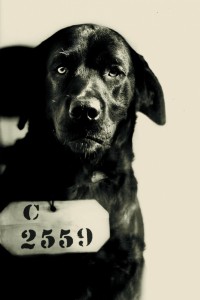 The name, “Eastern State Penitentiary” may sound somewhat familiar to you. That’s because it has been in the public eye on and off over the past several years. And because of the prison’s ‘haunted history,’ it has been featured in various episodes of just about every paranormal investigative TV show aired.

Eastern State Penitentiary was first opened in 1829 in Pittsburgh, Pennsylvania. Its revolutionary design was quickly copied by other architects in the U.S. and its “wagon wheel” design is shared by roughly 300 other buildings – according to those who study such things.

The focus of this article however, isn’t on any of Eastern State’s two-legged inmates, but on its sole, four-legged inmate, “Pep.”

According to legend Pep, a black Labrador Retriever, was housed at Eastern State Penitentiary from 1924-1930 by then Governor Gifford Pinchot.

Rumor has it that Pep, was forced to “take the rap” for killing his wife’s cherished cat. Governor Pinchot used his executive powers to essentially, sentence Pep to life without the chance of parole.

History, however, has a somewhat more plausible explanation for Pep’s “incarceration.”

When Gifford Pinchot was first elected to Govern Pennsylvania in 1923, Pep was taken to the Governor’s mansion and became part of the family. It was quickly learned though, that Pep possessed a penchant for chewing up the furniture in the home. Try as they might, Governor Pinchot and his family could not keep the dog from ruining the furniture and it was decided that Pep had to go.

Upon witnessing the positive effects of animals on rehabilitating criminals during a recent trip to a prison, Governor Pinchot decided that Pep should be given to Eastern State Penitentiary. In 1924, Pep was admitted to the prison where he became Pep – Inmate No. C 2559.

It’s kind of a sad story, but I like to think that Pep broke the ground in guiding the way to helping inmates sentenced to life in prison — enjoy the companionship of a pet, and vice versa.